December 28, 2021 (San Diego) – Hundreds of children who might have spent Christmas Day feeling sad, neglected or lonely were spurred on by love, food, lots of wrapped gifts and tons of imported snow in Southeast San Diego.

“So many partners have come together to make this happen for children and families who wouldn’t have had a Christmas otherwise,” Harris said.

Harris is the founder of the People’s Association of Justice Advocates and knows the plight of those who are heartbroken on Christmas Day. Harris grew up in a foster home in San Diego County and has bittersweet memories of a vacation that often left him feeling like a stranger.

“I spent most of my childhood in foster care after losing my parents,” Harris recalls. “It seemed to me that every year I couldn’t gain a foothold. I saw children at Christmas looking happy and it hurt my heart. I thought about my parents and the things I didn’t have access to, the situation I was in.

The entrepreneurs association building was decorated in a “winter wonderland” as a local disc jockey entertained the crowd with a mix of holiday music, hip hop and soul, Harris said. This created a special atmosphere for the children who came from Chula Vista in the south, El Cajon in the east, Vista in the north and everywhere in between.

“So many children and youth in San Diego County have had the Christmas they rightly deserve,” Harris said. “It brought together people disconnected from the community, people of all races, religions and belief systems.” 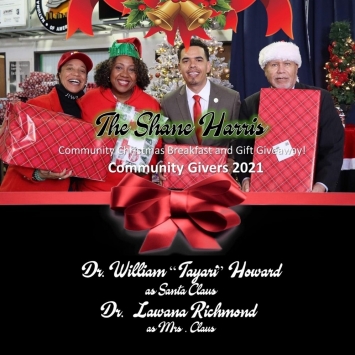 The event, in its fifth year, also honored two people as the event’s official “Santa and Mrs. Claus”.

Howard is a longtime local radio personality, author and speaker. A veteran of the United States Coast Guard, he also serves organizations such as Wreaths Across America and The Salvation Army. His book “Radioactive” should be published next year.

Richmond is UC San Diego’s director of business development in the university’s transportation, parking, and people movement department. She is on the advisory board of the Cay Montgomery Technology Fund, which supports community access to technology at the Malcolm X Library.

Jordan Marks, of the county tax assessor’s office, said he was proud the county is committed to helping the community do “a little extra to help.”

“It’s pretty unique to have an event on Christmas morning for the kids,” Marks said. “I told Shane that we value homes for a living, but it’s events like this that create homes. A home is a warm place to celebrate the holidays. Seeing the video with the smiles on the children’s faces shows that this event is something special. ”